Last night, as Hurricane Sandy was growing ever more fierce, a friend of mine posted a satellite photo of the storm with a spiral laid out over it: 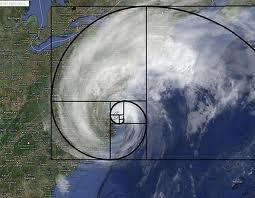 We’ve all seen this spiral before — in galaxies, sunflower seeds, snail shells, and, unfortunately for the universe, in the movie The Davinci Code.

In high school, I became obsessed with mathematics for one reason: the irrational number 1.618033…, also known “the golden ratio” or “the golden mean”, and only within the last hundred years or so, the lower case Greek letter φ (phi, pronounced “fee”). The number has unbelievable properties, enough that I’ve been shunned from parties for talking about them, gotten into arguments about its merits as compared to the far lamer π (pi). A single example of its mathematic beauty:

Another example was discovered by a guy named Roger Penrose. Called Penrose Tiles (kites and darts), if you take two shapes, each with two sides of length 1 and two sides of length φ (phi) and piece them together infinitely, you will have a set of random patterns whose ratio of one shape to the other approaches this magical number φ (phi). I have this tattooed on my ankle.

Now that I’ve mentioned my tattoo, I should also note another neato pattern. If you take 1+1/(1+1/(1+1/(…))), this too will approach φ (phi) with the more values you add. If you were able to keep going on forever writing it this way, it would be equal to φ (phi) (because it’s irrational). My friend’s tattoo is of this infinitely looping around her arm.

…and so on. Let’s focus for a little while on this sequence, keeping that magical number φ (phi) in our heads.

As much as I’m dying to, I won’t go into just how awesome this sequence is. I’ll just reiterate how closely related it is to φ (phi).

Which brings us to last night, when I tweeted the above image with the caption “Fibonacci!”. I was quite surprised to find that I got over 80 retweets plus a whole skew of thise quasi retweets. I was also surprised by how many people were correcting me on my “Fibonacci!” exclamation, suggesting instead that it was the “golden ratio” or the “golden mean”.

So I took it upon myself to see if the image indeed depicts a golden ratio, meaning a ratio based solely on 1.618033…, or if it is more based on a Fibonacci spiral, which is comprised of adjacent squares of sizes in the Fibonacci sequence.

Let’s look at the image again:

We can see right from the start that the sprial begins with only two squares. This suggests at first glance that this is a Fibonacci spiral, because a true golden spiral would have no beginning. But, since the image is only 255px wide, we’ll assume that was a constraint due to size.

So I pulled out the old ruler, and the image, and did some measuring, pixel by pixel. Here’s what I found:

Let’s analyze these numbers in the eye of the golden ratio: 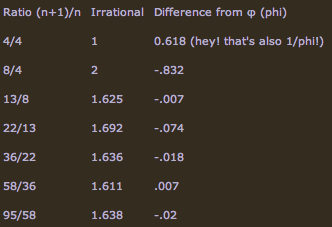 And from that of Fibonacci: And so, in conclusion, the spiral depicted in that satellite image of Hurrican Sandy is slightly closer to that of a Fibonacci spiral than to that of a Golden Spiral.